I feel blue. In this time of Thanksgiving, Christmas, and New Year’s I feel an oppressing pressure to be joyful. Solitude -which I treasure- turning into loneliness at warp speed and in slow motion at the same time. I do envy those who truly like being alone. And regret not being one of them. I am grateful for so much and so many but today I just feel blue. Winter creeping on me both physically and metaphorically.

Remember the movie Inside Out? On Halloween the year the movie was out (2015), I dressed up as one of the characters: Sadness. So this is an accurate portrayal of my state of mind now.

In the past my solution to my “blueness” was to travel. But I can’t anymore, so when I’m low I reminisce and travel again in my mind. For some reason Vietnam came to it. Which is odd, for of all the countries that I visited in Southeast Asia, it was the one I connected to the least. Yet, it was there that I was introduced to Caodaism. According to caodai.org: “The noble effort of CaoDai is to unite all of humanity through a common vision of the Supreme Being, whatever our minor differences, in order to promote peace and understanding throughout the world. CaoDai does not seek to create a gray world, where all religions are exactly the same, only to create a more tolerant world, where all can see each other as sisters and brothers from a common divine source reaching out to a common divine destiny realizing peace within and without.”

I realize I am in Rossmoor and that in Garden Grove, only 17 minutes away, is a Cao Dai Temple resembling the one just outside Long Xuyen, Vietnam that introduced me to this religion. Did someone say I could not travel? Off I go in a virtual journey no more.

So the path to the temple in Vietnam is dirt and rubble. Here it is busy streets that lead me to a residential area in Garden Grove, CA. I see the colors and it’s as if they are mermaids singing to me. I must go to it. Hopefully this visit has a better outcome than when the mermaids lure sailors in. 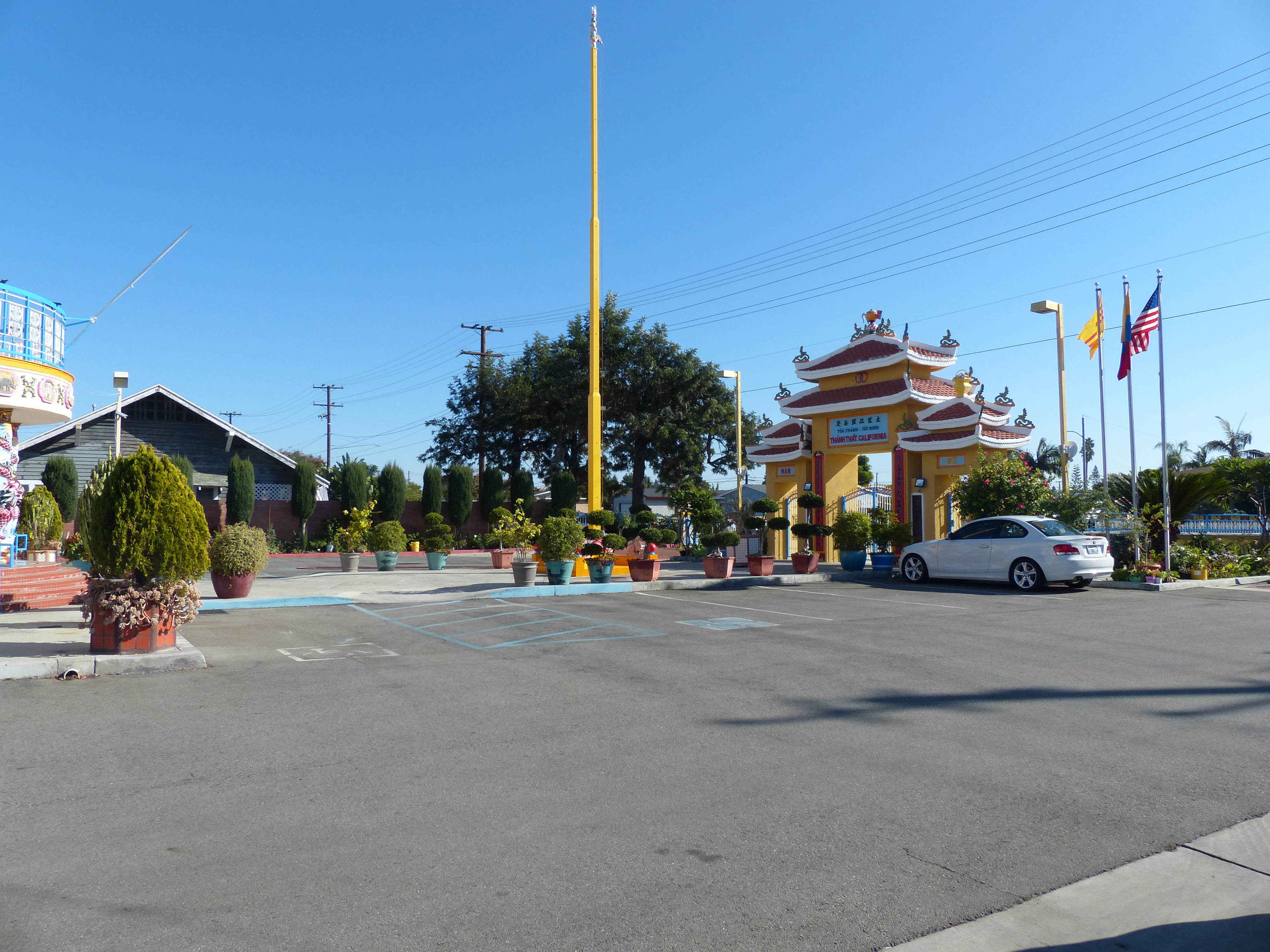 They have a parking lot and as I park I hear the sounds of a language I have not learned and probably never will.

The entrance is a mini-me of the temple I so admired and moved me in Vietnam.

However the main pole in front of the temple does not have the reversed swastikas which happen to have a Buddhist influence and is sacred to many Vietnamese. The swastika (a Sanskrit word) is also a tantric symbol to evoke ‘shakti’ or the sacred symbol of auspiciousness. I don’t doubt that its absence is due to trying to avoid controversy.

I take a few photos. Take off my shoes (as ordered) and enter another world. 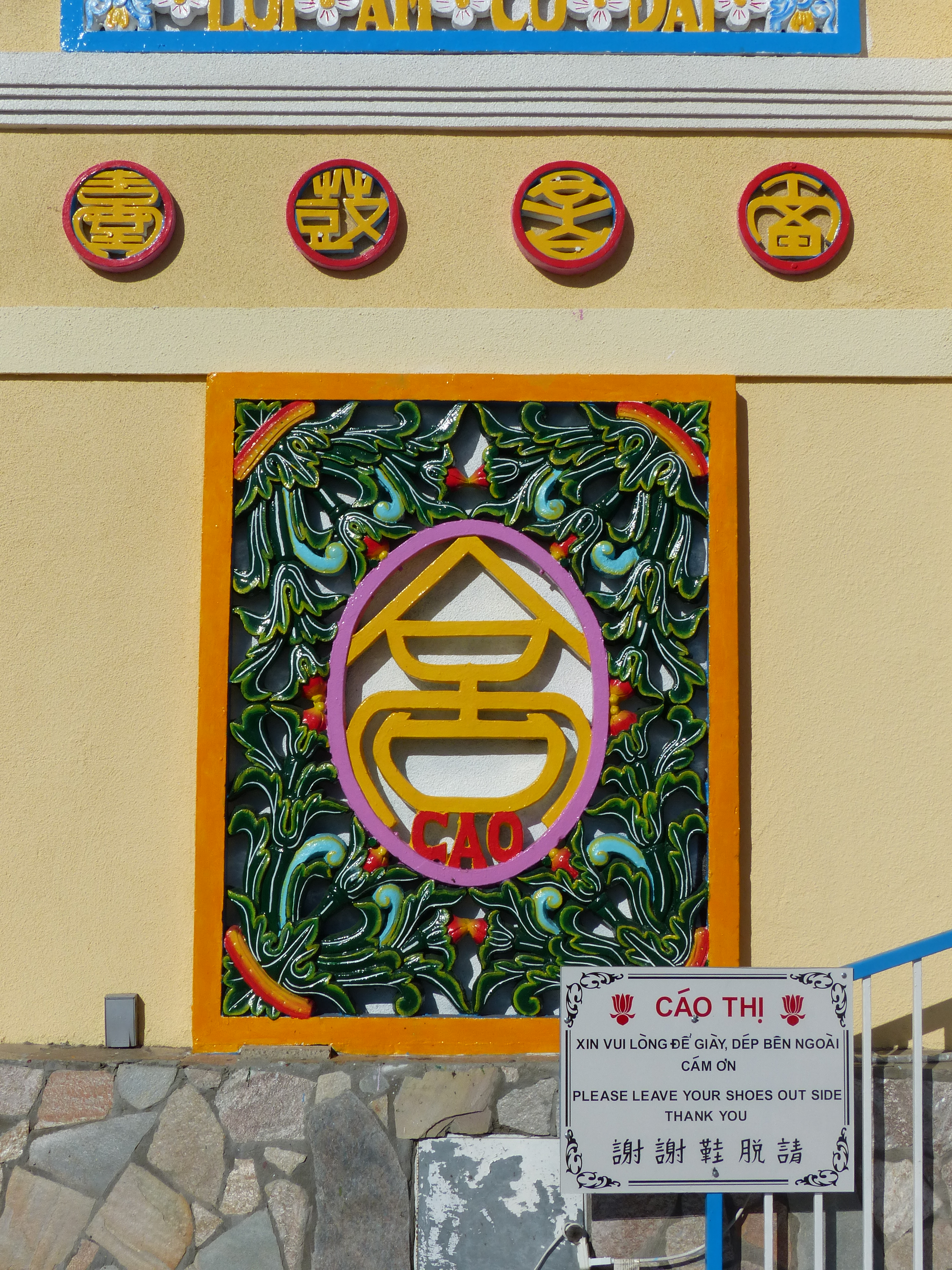 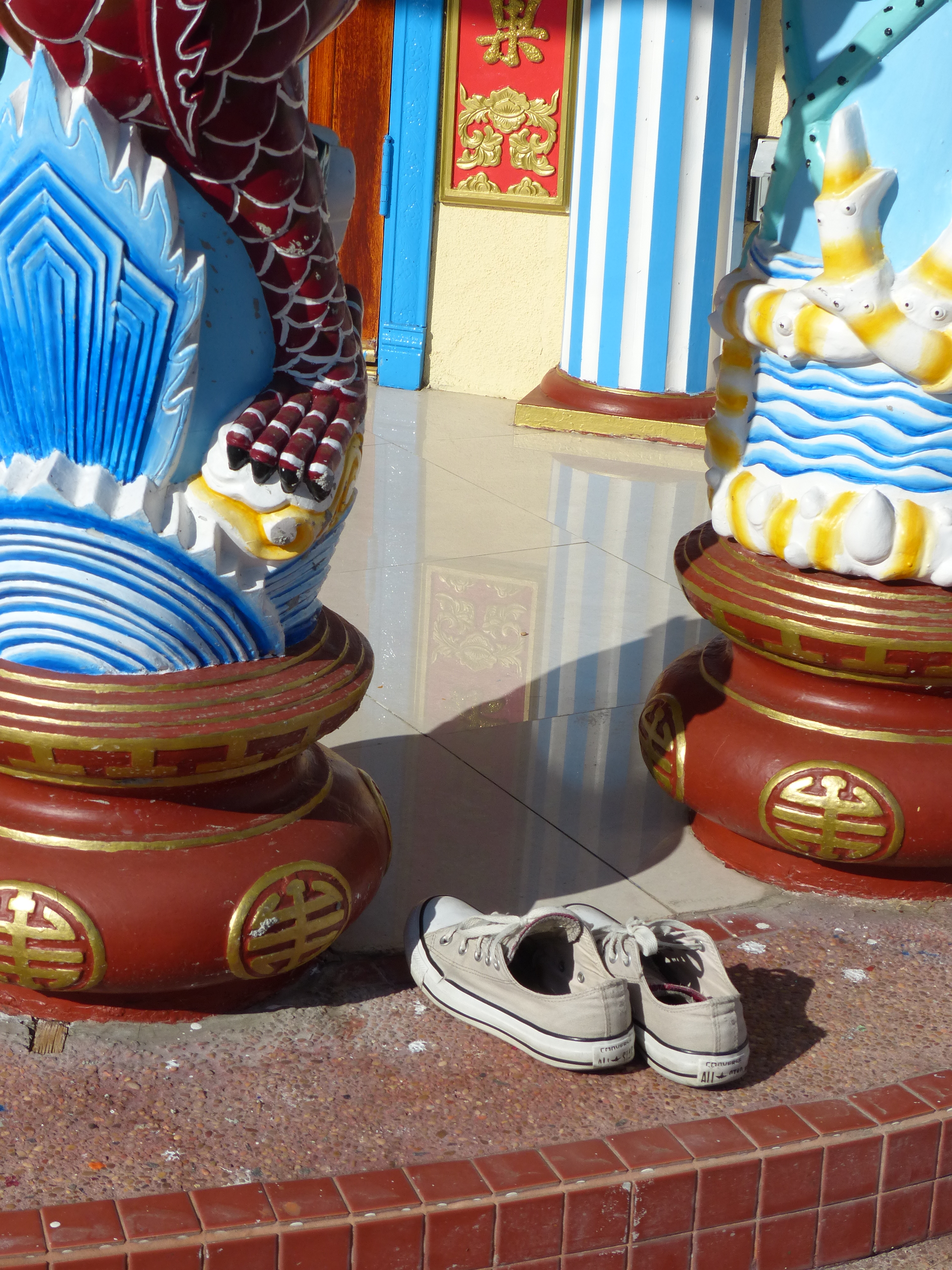 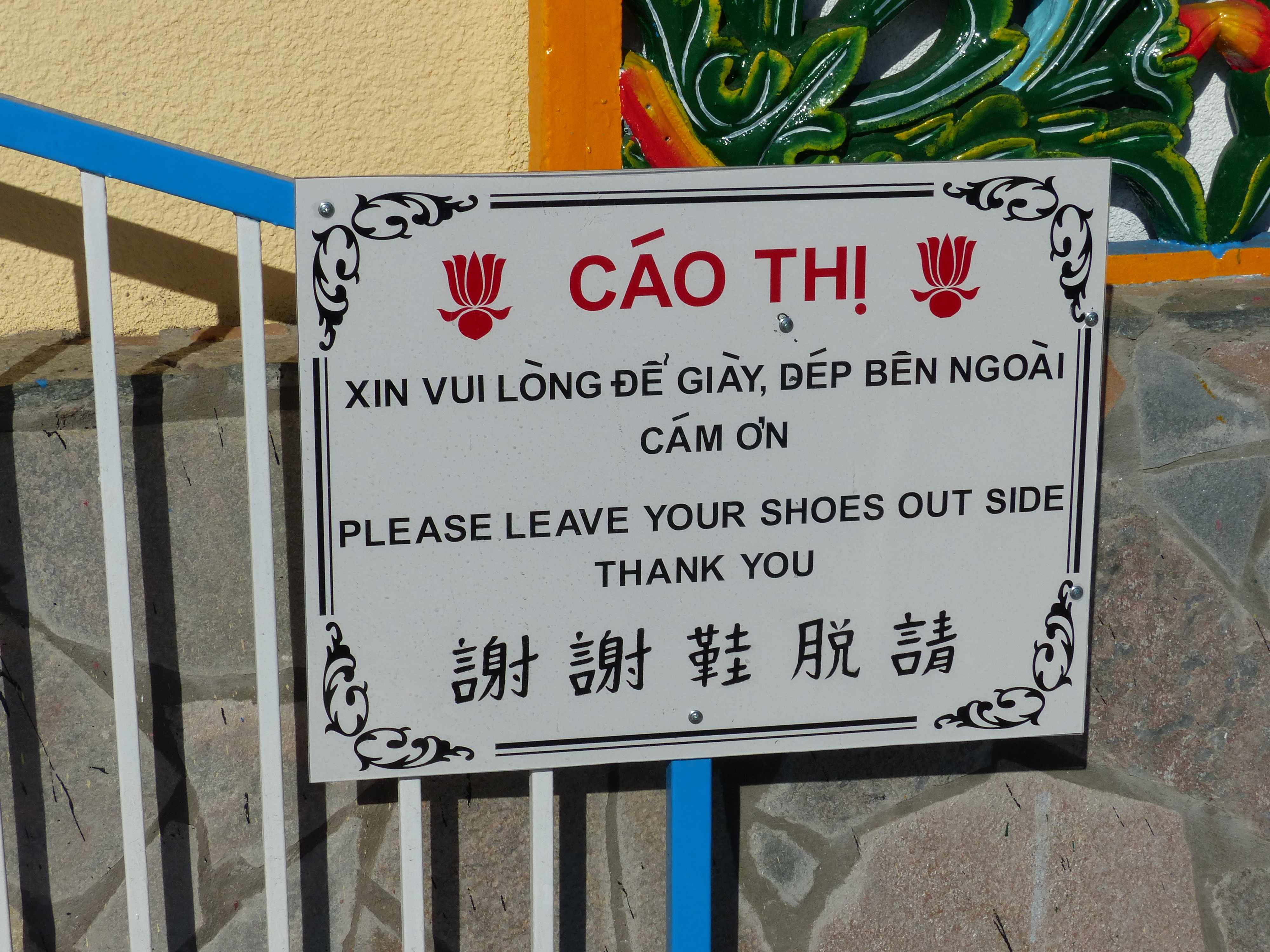 The place is smaller than than its parent in Vietnam but is just as colorful. The quiet I expected is not quite there for the side doors are open and in comes loud voices in Vietnamese from the courtyard. There’s a gathering of followers who are sprucing up the church. One side door is being primed and the other has already been painted yellow. It is noticeable that the congregation takes pride in their home. I kneel and find my inner quiet.

As I look through one of the windows and hear the background chatter, I am almost transported to Long Xuyen.

It is in the little touches of daily life and some writings that I linger.

Before leaving I explore the back of the temple. I pass about 15 people sitting around a table chatting and as they turn their head to see me, I join my hands in prayer mode and bow slightly, saying nothing. They go back to socializing; I go back to the car knowing that I will visit again.

And keeping my promise that I would end each blog with a song or two. Here are two. I did not see the movie that “I’m Standing With You” comes from (I think it’s about a mother and child) but I feel we all want that someone that stands with us through whatever we go through. I’ve been lucky to have those people beside me.

And then, one of Peter Bradley Adams, a singer that brings me happy memories. “For You” How can you not love a song that says: “If your wandering ever leads you, To a place where you don’t know which road to choose, Leave your worries behind, Take the road that leads to mine, And I’ll be waiting there for you”