Today, Friday, September 21, I am going to be a tourist!  First I do the usual: open the door and assess the weather.  It’s early still and brrrr… it’s a bit nippy.

Perhaps that is why the beach is still mostly unpopulated.

By the time Dean wakes up the breeze has let up a bit and it is not too cold.  We head out to the bus.   He’s bought me a Bus Pass that makes me feel like a local again.  Never mind that I don’t know where the bus stop is or what bus to take.   This outing will help me familiarize myself with the routes.  We stop at the Circular Quay (which I would have pronounced “kwa” with a long “a” and is actually pronounced “kee”) where the Sydney Opera House is.

The Harbor Bridge greets us.

I had wanted to do the bridge climb tour where they take you on top of this beautiful bridge.  Was willing to pay the $223 until I saw how high up they go and how windy it could be.  Uh, no thank you!  Ah, but what a view they must get (one that I would not be able to see with my eyes shut!)

Just in case the sight of this Sydney icon isn’t enough of a recognizable and welcome sight there is a big sign welcoming you to The Opera House.

Didn’t realize that the tiles form a pattern that makes it even more beautiful up close.  1,056,006 glossy white and matte cream tiles! 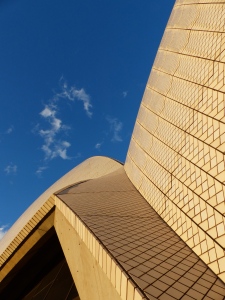 Across the harbor is Luna Park, an amusement park that immediately brought Coney Island in New York to mind.

The light is changing and giving the Opera House a different hue.  It’s as impressive up close as it is from a distance. 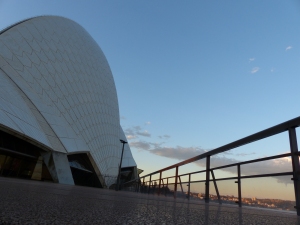 One photo of me just to prove I really was here and then we are off toward dinner. 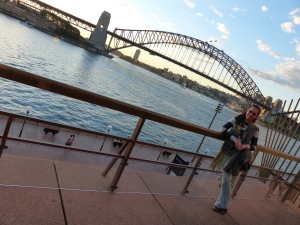 On the way we will see the Opera House from another angle.  But first I glance at the Harbor (Harbour written in Aussie) Bridge once more as the sun goes down. 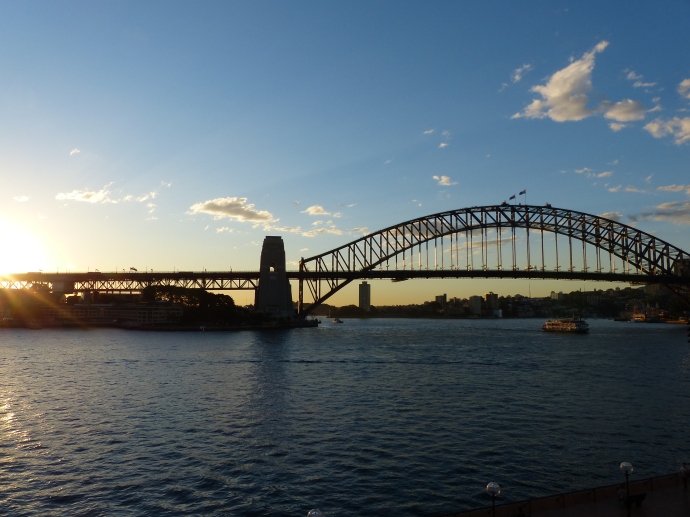 People at happy hour don’t seem to give it a second glance while the birds seem to stop and stare.

And then here, in all its glory, is the Sydney landmark from the other side.

Dinner was at an Italian restaurant, Zia Pina Pizzeria, in The Rocks, a historic area of Sydney’s city center.

We don’t roam much since we have to get back to the Bondi Pavilion to see I Want to Sleep With Tom Stoppard.    My first independent theater outing in Sydney.  I much enjoyed it.  At intermission there’s a large balcony (the theater is on the second floor) from where you can gaze at the beach.

We walk back home.  It’s gotten cold but I am getting to like the fresh breeze on my face and it makes a nice warm bed so much more inviting.

No Jetlag and No “Nasties”

Monday morning, September 17, and I awake extremely proud of my body not going into jet lag mode at all.  Never mind that the only time I have experienced it was when I flew back to Los Angeles from Hong Kong.  Hopefully I am not jinxing myself and I truly have escaped it.

I haven’t figured out this Telsa broadband stick thing so I am again with no connection.  This is becoming a recurring theme.  So today, after I eat a yoghurt –

which by the way, made me laugh out loud when in the nutritional info it stated Nasties: 0%- 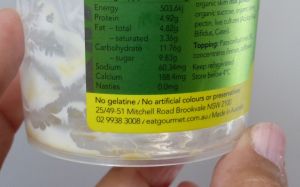 will head out to the café that has Internet.  It’s either Aussie’s great sense of humor or “Nasties” is their equivalent of “Other”.  I am trying to go as organic as possible and this yoghurt is divine.  I notice that there is an abundance of organic and gluten-free products in the market.

I pass Bondi Park which is right in front of the apartment.   Love the artsy sea serpent kids play on. 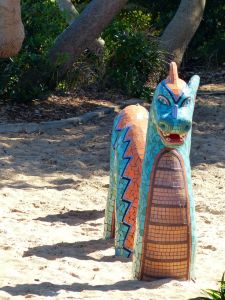 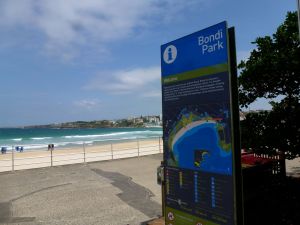 I arrive at Speedos Café, order a very healthy egg white scramble and a not so healthy toast.  They have Internet but as much as I tried I could not connect.  The girl who is serving me asks me where I’m from.  So I tell her and she proceeds to start talking to me in Spanish.  I was a bit surprised.  She tells me she’s from Medellín, Colombia, and that, contrary to what I thought, there are tons of Latinos (according to her, mostly Chilean, Colombian, and Brazilian) in Australia.  She tells me life is hard here and if it weren’t for the fact that she has an Aussie fiancée she would be heading back to her country.  In fact, it was another Aussie that fell in love with her in another part of the world and brought her here.  She’s been here 4 years.  She sings three times a week in a Cuban restaurant.  I seem to be getting people’s life story every time I engage in a conversation and loving it.  People are fascinating.  Their lives are so interesting even when they don’t see it as such.

She tells me of a local food market to buy stuff for tonight’s dinner.  In this short block, up the hill overlooking the ocean is where the locals are.

Ion and Tony’s Market will be my go to grocery store for as long as I’m here.  Filled with organic products and pretty much stocked with anything I need.  The owners are Greek.  One tells me that he went to Hawaii and was disappointed.  He much prefers the Greek Islands where he is from.  How could he not?  He did say the shopping was better than in Sydney.  Cheaper, much cheaper, as well.

As I went up the hill I spotted a turquoise, art deco building.  Don’t have my big camera with me but think I will come back and take a better photo of it.

At night we went to pick up some things left behind in another apartment in Bondi Junction and go to a supermarket.  It must have been around 10:00 pm and the streets were pretty much empty.  It started drizzling giving the town a bit of a haunted look.  Went to Coles, the bigger supermarket here though it isn’t as big as the ones we have in the States.  In the mall there is a K-Mart.

Sydney showed its true colors on Tuesday.  The morning was extremely overcast and very much on the cold side giving me the perfect excuse to do absolutely nothing productive or otherwise.  I gazed at the beach, the park.  Read. Wrote. And once again gazed at the horizon.   I can now go online and after a quick look and wonderful chat with a few friends I, believe it or not, disconnect.  The weather improved but I was so into my inactivity that all I managed was to visit the market and cook a quick spaghetti.  Then at night we headed out to the beach for a gelato but the place was closed (again, it was after 10:00) so settled for something called Paddle Pop.  I don’t like chocolate but have been on this strange binge of craving for it.  Somehow this ice cream popsicle tasted specially good walking the coastal walk and hearing a very feisty ocean crash its waves against the coast.  It’s cold, almost deserted, and just eerily beautiful.  It was actually quite magical.  Another perfect ending to the day.

As we walk there’s a police car in the middle of the street and as we look to where they are looking there is this guy propped upright against a side mirror of a car, effectively in another world –either dead or very asleep.  They shine their flashlights on him.  He doesn’t budge.  We wait to see if he’s alive.  He wakes. We leave.  When we pass the place again cops and drunk are gone.  I ask what probably happened and am told that the cops probably took him home.  Certainly am not in LA where he would have probably spent the night in jail.

Wednesday allows me to do something I haven’t done in many, many years.  I do a wash and hang my clothes on the clothesline.  Washes I’ve done before (though maybe not for $4).  Hang clothes on a clothesline, nope.  Today is sunny and I can’t help but smile as I see wetsuits on it.  Must be surfers in the building.  And then, when I ponder what to do with the undies I laugh when I see bras and panties on the line.  So I proceed to hang mine up and to weave stories from the clothes others have hanged up.  I wonder if the same is done with mine.

It’s sunny outside and in two hours time they are dry.  I bury my face in the clothes and inhale.  There’s a scent that the clothes get when left to dry in open air, under the sun, in an unpolluted environment that just can’t be reproduced commercially.

Tonight we are going to the screening of Graham, a short shot and edited by Dean. It will be screened at the Ritz, an old theater probably built in the ‘40’s.  It has an art deco feel to it.  It’s heritage listed as they say here.  Landmark Building as we say in America. Pretty.  Unfortunately, the film is actually being screened in the new addition so I didn’t get to see the old main theater. Couldn’t help but compare the ones in LA to the one here.  If it weren’t for the people’s accent, the whole set up -presentation, thank you, etc.- is pretty much the same.  The only thing is that in our screenings I almost always know most of the people so mingling comes more naturally to me at home.

It’s almost 10:00 pm by the time we finish chatting and socializing a bit.  Most everything is starting to close but we are hungry so cross the street to El Bulli, a Spanish tapas restaurant that is still serving food.  Music piped in is Colombian (a cumbia), there’s tequila prominently displayed on the bar, some of the actors are sipping margaritas, the tapas menu is very limited and when it arrived it was a bit of a hodgepodge of countries.  They had a dish of Albóndigas de Paella.  Paella shaped in a ball and fried.  Fun, original and tasty.  I got spicy empanadas.  Both were good but not quite Spanish tapas.  Oh, and I still can’t get over sticker shock.  $35 for two itsy bitsy plates, no drinks.  Fulfilling nonetheless.

Back to the car that will get us back to our flat (apartment for us) on the beach, in no time.