The Road to Hollywood Forever is a Lifetime

I walk, drawn to side streets by colors of street art. I have stopped often but as Bill Murray’s character would say “It just doesn’t matter!” I am in Hollywood.

Continuing on the color theme (not for long, I promise) there’s a building that just can’t help but catch my attention. It’s pink and garish and pretentious to call itself Hollywood Dream Suites. I suspect that they are not. I later find out that it’s a hotel and from the reviews I read, I may have been right. 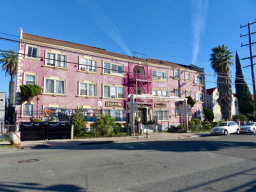 I pass Raleigh Studios where I once filmed an episode of Castle. 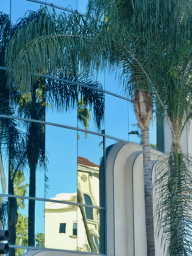 Across the street is Paramount Studios.

I wasn’t specifically meaning to go to where it all ends for some, but the end of the year was approaching and there was some poetry into visiting a cemetery.  I had visited before but it was at night and my attention was held by a projection of an old movie on one of its mausoleums. A bit heretical perhaps but in Hollywood there is little that seems inappropriate. 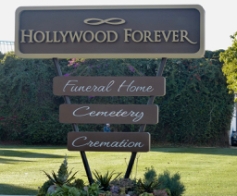 I am greeted by a creature that is very much alive and quite interested in the chips I’m chomping down on.

Near the entrance here is a little section that seems straight out of Southeast Asia. Possibly Thailand. I reminisce and long to be back. 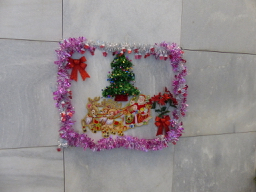 The niches of some are still decorated for Christmas. Very much a Latino/Mexican culture tradition.

I walk into some mausoleums. It is peaceful but cold inside. They draw you to whisper rather than hear your voice bounce back to you in an loud echo. 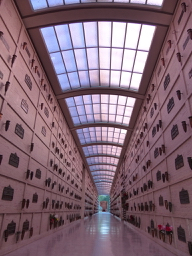 It is in one of them, a smaller one, where Judy Garland rests.

I go outside and enjoy the day and the greenery and flowers which abound. 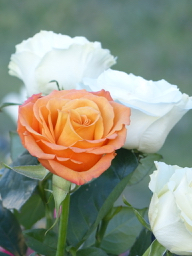 This cemetery, dare I say, amuses me. There are people with sense of humor recorded forever in the engravings they commission on their tombs.

A graphic artist has his tomb shaped as a rocket. I believed that it was his way to ensure a direct flight to heaven. But engraved is “The atlas, pioneer in space, symbolizes the lifetime activities of Carl Morgan Bigsby, a recognized leader in many phases of the graphic arts, he too was a pioneer.”  The atlas, an exact scale of the original missile The Pioneer Atlas.  His tomb reads Carl Morgan Bigsby 1898 – 1959… RETIRED BY GOD.  Sad that he would not be able to see the smiles generated from that line.

And of course, it’s Hollywood so a film camera portrayed in granite adorns the tomb of a foreign director.

And what is film without music? Johnny Ramone still plays on his grave next to the film director. 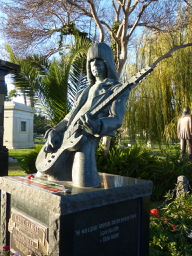 Hatie McDaniels has a surprisingly humble tombstone. She was the “mammy” figure in the film Gone with the Wind.  In 1940 she got an Academy Award for best supporting actress. She was the first African American to receive an Oscar. 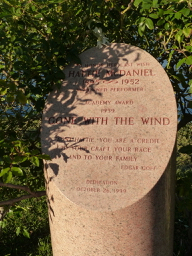 The grave of Irene Guadagno “Mama Irene” caught my attention because she had my middle name -which I never liked so please forget I mentioned it- and because it was pretty cool to me the posture with raised arms with which she was immortalized. Since then I learned that was an Italian entrepreneur mother of Pasquale Rotella (who was married to Holly Madison of Playboy fame).

Anton Yelchin, an actor, who was killed at 27, in a freak accident when his car crushed him against a security fence is looking on to the cemetery lake. His grave is marked 3-11-89 – Forever.

And then there’s Toto, who is not buried here but has a granite statue of him in remembrance.

Entering another mausoleum before they close all at 5:00 pm. It almost feels like going into a European museum hall. 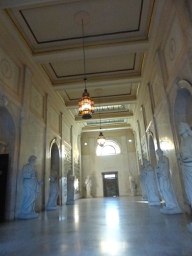 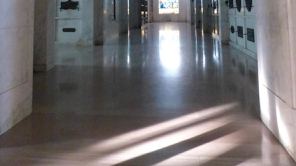 More smiles as I exit and encounter another tombstone of an English actor that only has the date of death and not of birth. So like an actor to never reveal his/her age.

Marzie Harris was a Loving Mother, Sister, Daughter… and occasional wife. I wonder if that engraving was her idea.

There’s a lake that has a small island with a huge mausoleum. It belongs to William Andrews Clark Jr. a philanthropist and a lawyer who founded the Los Angeles Philharmonic. 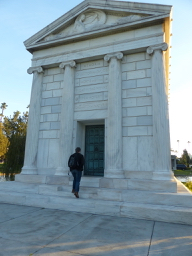 The lake is tranquil and full of life. 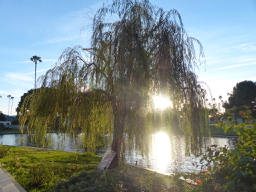 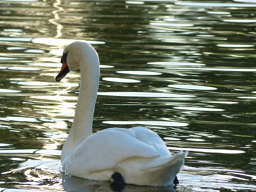 On the peripheral of the cemetery there is more life. There’s a group of cats, all white and black, that consider this their home as well as some peacocks that make any visiting car wait for long minutes until they cross the path. 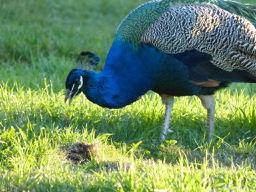 On the way out an angel makes me sad. 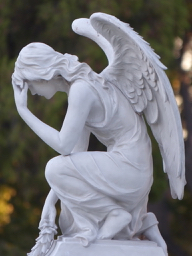 I leave and roam the streets some more, searching for color. I don’t walk long before encountering it. 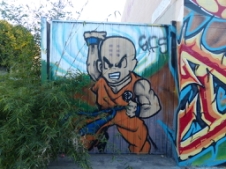 Can’t resist the urge to end the day with a sweet treat. A YumYum Donut with fresh icing on it. Life continues. 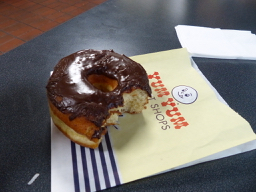